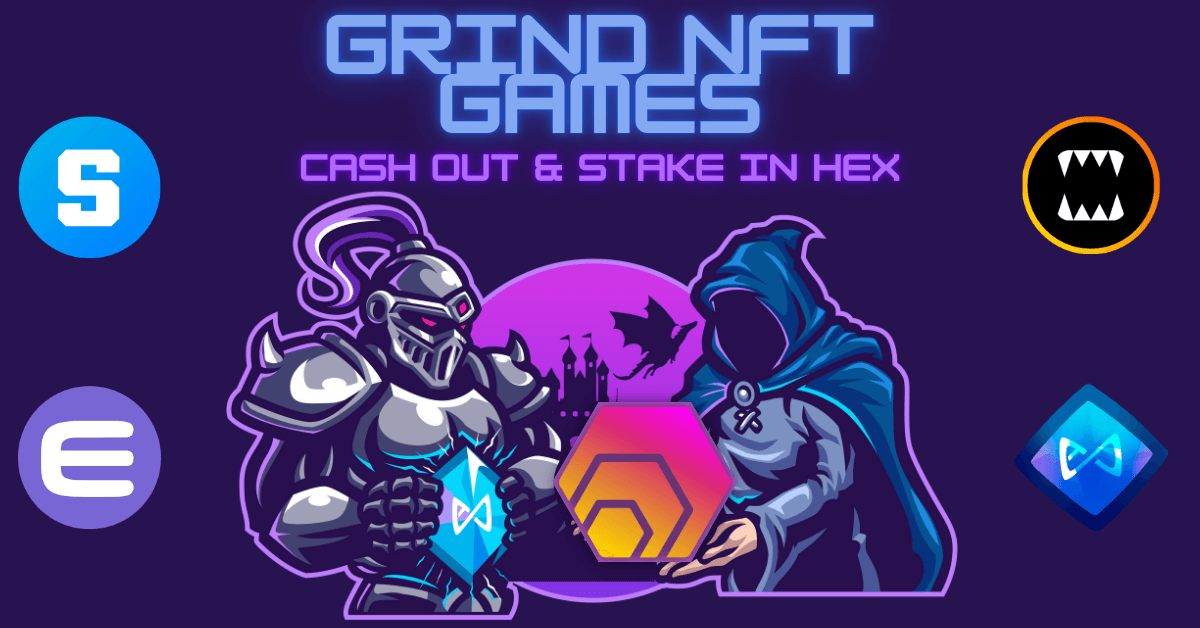 Many successful people will tell you playing video games is a waste of time. Well, they can go to hell!

In all seriousness, video game grinding might be a waste of time if you have not already taken care of the big three – health, wealth, family.

If you’re health, wealth, and family are doing well, then spending some time in video games is fine.

Traditional games generally offer nothing in return besides entertainment. Grinding long hours will get the dopamine flowing but you won’t have much to show for it.

You don’t own the items you earn, and you generally can’t make any sort of income unless you are a streamer or pro gamer in the esports community.

New blockchain based NFT games are such that players can be “rewarded” with assets or tokens that they actually own, including

It is possible to grind long hours and get “paid” in the form of cryptocurrency that you can use across the metaverse, or simply sell. These tokens are often in the form of an Ethereum ERC20.

One overlooked feature is the ability to delay gratification and push the true reward into the future. This can sometimes be done natively within each ecosystem (SPS, AXS) but you might not get the return you want, or perhaps you find yourself completely disinterested with the game after awhile.

HEX is a trustless blockchain certificate of deposit where you stake the token natively to get a share of the future inflation. You stake HEX (burns tokens until you re-mint them) and receive T-Shares or B-Shares in exchange.

Each day, you receive a piece of the daily HEX inflation based on how many shares you own. You can stake as little as 1 day or 5555 days (roughly 15 years).

You could spend a month grinding an NFT game, then decide to stake your earnings out six months to get even more in return, plus token price appreciation! The longer you go, the better the pay out will be.

Not sure how HEX works? Check out this video:

Below are a few example scenarios in which you could grind NFT games, and then convert the economic energy from tokens you earn into HEX shares and passive income.

Splinterlands is the most popular NFT game and there is currently an airdrop of the new SPS governance token to all players based on their assets and earnings.

This token has appreciated in value in recent months, but if you no longer wanted to be part of the game, put your earnings to work by converting SPS into HEX by staking long term. This can bring in a huge amount of value based on the future price appreciation of HEX.

Axie Infinity also had a large airdrop of their governance token, AXS, to many early players. While they did introduce a staking mechanism, this assumes you still want to be part of the Axie Infinity ecosystem long term or are banking on its success as a game.

If you decide to move on, convert your AXS into HEX and stake your gains out as long as you’d like.

The Enjin ecosystem is cool because gaming NFTs are actually backed by Enjin Coin embued inside.

A legendary sword might be backed by 100 Enjin Coin for example.

This gives the item a value of at least what the tokens are worth. But one cool feature is that you can choose to melt the item down into Enjin Coin, which is an ERC20.

You could then visit the Metaverse Exchange, swap your Enjin Coin (ENJ) for HEX, and stake it out to get returns over time, just from grinding a video game!

The Sandbox is a very cool up and coming decentralized Minecraft style metaverse world.

LAND plots are very popular and can be bought/sold using SAND, the native ERC20 for The Sandbox Game.

Let’s say you spend some time flipping virtual real estate – take your SAND earnings and convert them to HEX, thus creating recurring passive income from the certificate of deposit contract.

Mine Trilium from Alien Worlds

Alien Worlds is a passive game in which players can earn Trilium (TLM). Generate as much as you can, then convert it to HEX at the Metaverse Exchange and call it a day!

As you can see, there are a number of ways to generate tokens/income from playing NFT games. If you no longer want the native token, swap it to HEX to stake it long term for ultimate yield!

The upcoming launch of Pulsechain will have a system state copy of Ethereum, which means all ERC20 tokens and assets will be copied over. However, it is unclear whether any of these will have value just yet on Pulsechain if the communities do not adopt the new Pulsechain version.

However, HEX will function exactly the same way, and all existing stakes will be duplicated!

This means you have the opportunity in the coming weeks/months to cash out of any games you no longer want to play and instead stake long term in the form of HEX – which will occur on two chains!

Bookmark and use The Metaverse Exchange to swap NFT game tokens into HEX.

Got your HEX? This video explains how shares work: